Hey, it’s Mr. Pink here again from the blogÂ Modern Synthesist to share some more tips and tricks about How to Sculpt Miniatures. In my previous post, I outlined the basics tools you need to start sculpting and went into a bit of detail about how to use them.Â In this post, I want to impart my 4 Sculpting Caveats and a couple of tips and tricksÂ or greenstuff hacks.

My 4 Sculpting Caveats are the following:

We kind of already covered this in the previous bit where I suggested that lubricant is a key part of your sculpting tool box. Greenstuff is so sticky that it is impossibly hard to work with if you don’t find a way to keep it from sticking to your tools or hands. The only further tips areÂ that you should only use as much lubricant as you need, and you need to keep the lubricant mostly on your tools/hands and not on the models or putty you’re using.

For example, I don’t want to get my cream all over the model or putty, so when I’m first kneading the putty and placing a ball of it on the model, I use water to lubricate my hands and tools. Water won’t cling to either the putty or the model, and it dries pretty quickly. Only once I’ve successfully attached the putty I’m working with to the model do I put a thin skein of cream on my tool, wiping any excess off on my hand.

Many a sculpting project has been marred by trying to do too much at one time. You get a bit of detail perfect on the model’s face…

…and then you go to sculpt a bit on its leg, butâ€”WOOPSâ€”you just mashed your finger into your carefully sculpted faceÂ detail while shifting your grip on the model!

I speak from experience. I still do this from time to time when I’m excited to get one miniature done. Sure, if you’re fastidious about mounting your models on corks and never touching the actual model, you might not need to worry about this. However, no one is perfect, and it is never worth a big fat fingerprint where an awesome detail should be.

A little bit of patience in the short term will save you a lot of sanity in the long term.

I typically have a couple of projects I’m working on at once so that when I’m happy with a detail on Model A, I can set it down and switch to sculpting on Model B to allow Model A plenty of time to dry. The working time of Epoxy putty is 2-3 hours, so I’d recommend setting a model aside for at least 2 hours before going back to it and sculpting something else. If in doubt, check if the putty is dry by prodding it gently with a tool. There’s a way to speed up the drying process, but I’ll get to that below.

I think a lot of people get frustrated with greenstuff because they take a big lump of it, plunk it on a model, and assume they’re going to sculpt a head/shoulder plate/whatever from scratch. However, greenstuff is very pliable in its workable state, so if you’re working on a big hunk of it, without a solid structure beneath to work against, it has a habit of distorting and stretching.

To remedy this, build your greenstuff up in layers, allowing time for each layer to fully set before you start on the next, and add fine details only in the very topmost layer.

If you’re sculpting thin things that stickÂ out from the model, like arms, tails, or weapons, start with an armature: a piece of strong wire that you bend into the rough shape of the thing you want to sculpt. 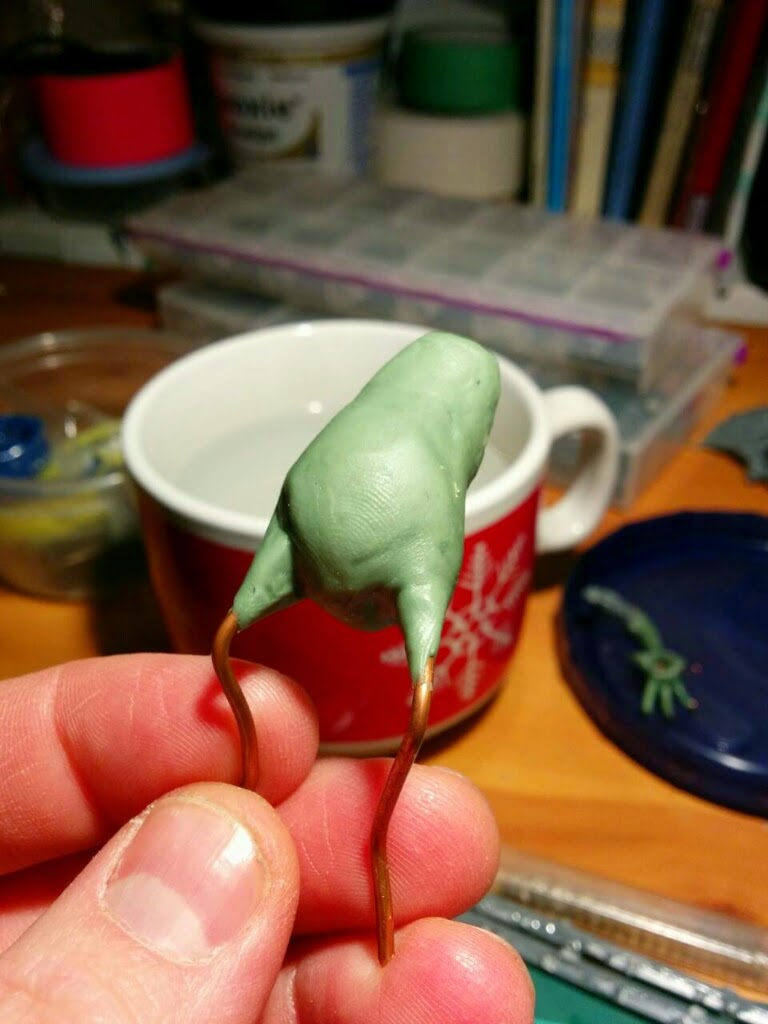 Then add a layer of greenstuff to rough in the shape of the appendage, and allow this to set.

If you’re sculpting bigger things onto the body of the model, rough in their size and detail with one layer of greenstuff, allow it to set, then sculpt in the fine details and sharp edges using a subsequent layer.

First, I created a wire armature for the hand, then blocked in the palm with apoxie sculpt:

I let this set, then went back to add the details to the hand using Greenstuff:

If you think you’re going to become a greenstuff whizÂ by reading some articles on the net or watching some YouTube tutorials, I’m sorry to disappoint, but it’s not a realistic goal.Â It might seem like an obvious conclusion, butÂ the only way to get good at sculpting is by DOING IT. All of the tips I’m sharing in these articles are meant to give you the most solid basis possible for starting your sculpting journey, but, at the end of the day, you’re the one who needs to step up and try it out on some models.

I’m only as good at sculpting as I am because I’ve been practicing (and failing!) for years. Don’t believe me? Well here’s some proof.

What I’m trying to illustrate is that no one is born as a natural sculptor. Anyone you’ve seen who can do eye-watering greenstuff work is someone who, at one point, produced a bunch of really rough, finger-print-studded, greenstuff duds at one point in their career! So, once again, the only way to get better at sculpting is by picking up your tools, digging out those old ork models you never threw away, and experimenting with some actual sculpting.

The 4 Caveats outlined above will get you most of the way they when it comes to handling epoxy putty without tearing your hair out. However, I’ve been gifted two other hacks thatÂ focus on extending the life of greenstuff so you can buy less of it andÂ getÂ a longer lifespan on the putty you mix.

In my first article, I mentioned how Apoxie Sculpt is a cheaper and more plentiful alternative to greenstuff. Though it has its own properties that differ from greenstuff, the two are, essentially interchangeable. In fact, they’re so close in terms of application andÂ chemical compositionÂ that you can combine them!

Why would you ever want to combineÂ greenstuff and apoxie putty you ask?

The main reason I do it is that it makes my somewhat pricey greenstuff stretch further. Everything I sculpt these days is made of a 1:1 mix of greenstuff and apoxie putty. This hybrid putty, which I’ve dubbed Apoxie Green (TM), has all of the benefits of the two putties with none of their weaknesses. It also means that I use half as much greenstuff as I usually would by diluting it with the cheaper apoxie sculpt.

In general, I would definitely recommend everyone pick up some Apoxie Sculpt. You get so much of it for such a reasonable price that I feel like it inspires me to try out bigger projects without worrying about wasting putty if they come out horribly. I’ve been able to use it to great effect in creating Tyranid scenery, for example.

Greenstuff Hack: Use Hot and Cold

If you’re in a hurry and want your sculpting to harden quicker, you can place your sculpted model close toÂ a halogen lamp. However, don’t do this with sculpted details on plastic or resin models as the heat will also warp the plastic!

If you want your putty to last longer, you can decrease the temperature of it.Â This might not seem like a very useful application as no one wants to be sculpting in an icebox. However, where this fact is very useful is in extending the life of putty you’ve mixed up from 2-3 hours to 1-2Â days.

This, I feel, is one of the most game-changing revelations about epoxy putty and greenstuff. I used to waste so much of the stuff because I would mix too much and not be able to use it all before it set. Now, whenever I start sculpting, I portion my extra greenstuff into even sized balls…

…Dump them into a small, sealed container…

…and drop them in the freezer.

Then, as you’re moving through your sculpting queue, you can remove the greenstuff one ball at a time, leaving the rest in the freezer.

If you get the puttyÂ into the freezer right away, and you have a particularly cold freezer, I’ve been able to pop the stuff out and use it as much as 2 days later. You might even be able to stretch it to three, but I’d say that’s pushing it a bit. Best thing to do is test the putty, and if it feels like it’s getting too hard, chuck it all and mix some more.

With these two hacks in your back pocket, you should start to get a lot more mileage out of your greenstuff. If you’d like to read some more of my thoughts on the Caveats or Greenstuff Hacks, check out my post How to Sculpt Miniatures 3: Sculpting Skills.

Now that you’ve got the basics for pushing putty, there’s really no reason why you shouldn’t get out there and try some sculpting for yourself!

I hope you’ve enjoyed my two articles on greenstuff skills and sculpting. Like I’ve mentioned, there’s a lot more where that came from on Modern Synthesist under the How to Sculpt Miniatures series.

I’m also trying to come up with some more ideas for this series, so if there’s anything you’d like to know about sculpting, please share your questions below. Additionally, if there are specific things you’d like to learn how to sculpt (like stitches, or spinal columns, or musculature or whatever), please share those suggestions, and I’ll see if I can whip up some more detailed tutorials for everyone 🙂

Was this article awesome? Then please share it with your friends

Photographs and writing are Copyright (c) 2016 by Broken Paintbrush, a Systematics Innovations, LLC company. You are free to share any images or snippets of text here as long as contribution is made back to the original page on BrokenPaintbrush.com

Brand names copyrighted by Games Workshop, Fantasy Flight Games, Acrylicos Vallejo, and any other mentioned company are owned by the respective company and no claim or challenge is meant here. If you feel there is any copyright infringement on this site, please contact me at:

Please note that some, but not all, links may be affiliate programs. These links add no additional cost to you, but I may receive a portion of the revenue generated. This helps bring this content to you for free and helps pay my bills. Your support in purchasing through these links enables me to buy more models and create more tutorials, so thank you!
Loading Comments...